“You don’t have to be a slave to your suffering.” 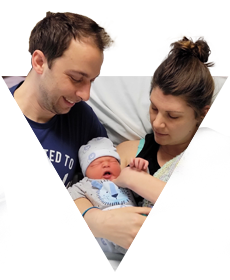 Sarah Derocha had made many Christian medical missions trips to remote areas of Bolivia. The nurse practitioner felt at home thousands of miles from her native Illinois. But in 2014, at just 26 years of age and traveling with other missionaries to Salar de Uyuni, the largest salt flat in the world, her life changed forever.

Extreme weather conditions, coupled with the altitude, made for treacherous driving. Late one afternoon, while riding on a bus with 44 colleagues, they were struck head-on by an SUV. The bus lost control, flipping on its side, pinning Derocha’s left hand underneath the full weight of the vehicle. She’d been scalped in the accident and was bleeding from her head. Her radial artery, which supplies blood to the forearm, had been severed. The scene was chaotic and person after person tried and failed to help her. An hour passed, her adrenaline the only thing keeping the pain from devouring her.

Sarah was certain she would die there in Bolivia.

The thinner air exacerbated Derocha’s deteriorating condition. It was difficult to breathe. The indigenous people she traveled with tried to keep her comfortable, tried to figure out how to free her and make contact with someone in the nearest town, two hours away. Though in a terrifying situation, her faith kept her awake and determined to survive. Derocha prayed, “If this is my time, you have to give me strength to get out.” “It was hopeless,” she added.

Her training as a trauma nurse saved her life. She had a little medical bag with her and was able to grab Tylenol to chew on. From her position on the ground, and in respiratory distress, she called out as loudly as she could. She asked people to give her their belts or scarves to make a series of tourniquets, all of which quickly bloomed red with blood. Finally, a young girl came to her with a spoon, trying to dig a hole underneath her hand to free it. Sarah took the spoon and managed to dig herself out and crawl up through the upside-down emergency exit.

Finally, through a series of phone calls to the United States Embassy in Bolivia, communication in multiple languages and more than a few strokes of luck, a rickety ambulance came and took her on the excruciating two-hour journey to the nearest hospital. She recalls the facility being shockingly primitive. Arriving there did not boost her hopes of survival. “I was trying to tell them I needed antibiotics or I was going to die. I told them I had to have oxygen, and requested fluids.” As the medical staff did their best to understand her and give her what she needed, her colleagues were frantically trying to get her on a flight out to the nearest major city, La Paz, for more extensive care. Luckily, the little hospital had a CT scanner, and her scan showed no evidence of brain injury, which would have precluded her from a transfer.

Through the missionaries’ connections with the Bolivian Air Force, she was flown to a hospital in La Paz, arriving 10 hours after the initial collision. “Once my hand was free, the pain came. And it never went away, and no one gave me pain medication until I was settled in the hospital.” Derocha spent five nights there, receiving basic care before she could get evacuated to the US.

That leg of the journey was equally difficult. She had to take three commercial flights to get home. Her family and two physician friends who were also missionaries welcomed her at Chicago’s O’Hare International Airport. At this point, she knew that time was paramount to staving off infection and any further damage. “I just wanted to get to the University of Chicago Medical Center the fastest way possible, so I told my friends to throw me in the back of their Honda. I knew it would be faster than any ambulance,” she recalls.

The damage, recovery and TMR surgery

Sarah’s injuries to her hand were severe. She had a crush injury, which severely damages nerves. She lost her hand, and six months after her accident she still had glass in her stump. It took five surgeries to get her functioning again, but she was far from feeling OK. She had also developed three neuromas.

Hands are sensitive. When the nerves there are severely damaged, they regenerate into themselves, evolving into extremely painful neuromas.

“I was in constant, severe pain, and taking hard pain medication, antidepressants and tried medical marijuana,” she says, and still was in extreme pain. She didn't want to become dependent on the drugs, and says weaning off of oxycontin was “brutal.”

While she was doing regular occupational therapy and physical therapy, she crossed paths with a friend of Dr. Gregory Dumanian. Her friend understood how much she was suffering and recommended that she see him at Northwestern. “My family and I went to see Dr. Dumanian who immediately offered me a chance to participate in a double blind study for methods to resolve neuroma pain.” Derocha was thrilled. She had never heard about TMR, as her experience in nursing was on the acute care side, and not in the aftermath of injury.

Through the study, she received TMR surgery in February 2015. “I was back to work by August 2015. The surgery completely took away the phantom pain and neuroma pain, which had become literally unbearable.”

Derocha says she went from living in darkness to getting her life back. She finished graduate school, married and recently had a baby.

For Sarah Derocha, TMR surgery was absolutely life-enhancing. She has directed many patients to Dr. Dumanian since her procedure, hoping they can receive similar relief as she did.  As more physicians are being trained in the surgery, Derocha hopes people will seek out this solution to nerve pain.

“It immensely improves your quality of life. You don't have to be a slave to your suffering.”